My buddy Rob reminded me today that it was 20 years ago this week that we opened Hero Hero Comics Cards and Games. It seems like a lifetime ago..and it was - the lifetime of my son, who was born the week before the shop closed in 1997.

I found a few photos up in my office - they're not a complete picture, just a glimpse of what was many years of incredible experiences. 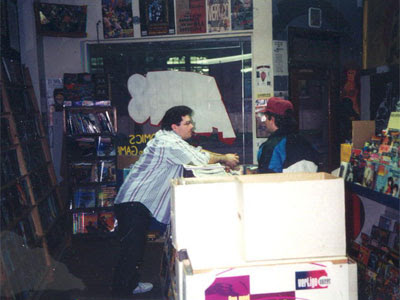 Chatting in the shop one late night with my buddy Mitch. 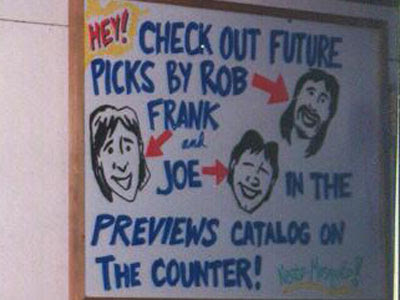 We had rubber stamps made with these cartoon faces I'd drawn of the 3 owners - we would stamp our faces next to items we liked in the monthly ordering catalog. 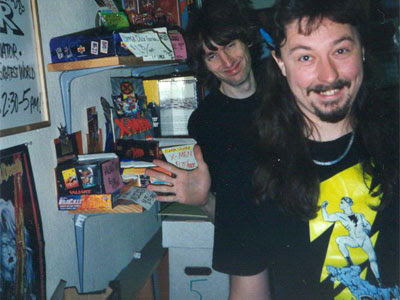 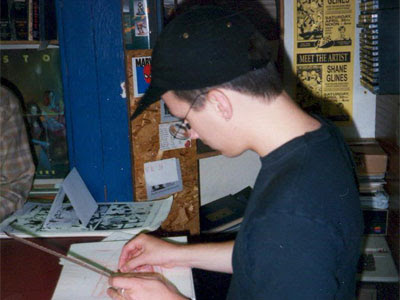 In-store appearance by Shane Glines. Shane was just starting out when he was at the shop. Soon after this, he moved to California to work for Spumco and went on to work on animated shows like Batman: The Animated Series, Batman Beyond and Samurai Jack. 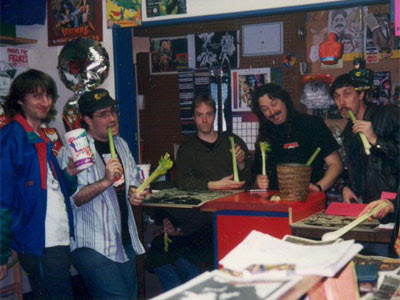 Frank, me, comic book artist (and featured actor in TRAILER PARK DOUBLE WIDE TRILOGY OF TERROR) Jack Pollock, Rob and our friend Dale at an in-store appearance by Jack celebrating the release of his Devil Chef one-shot from Dark Horse Comics. We are enjoying some celery, which according to a hilarious fake ad in the Devil Chef book is "nature's toothbrush for your colon!" 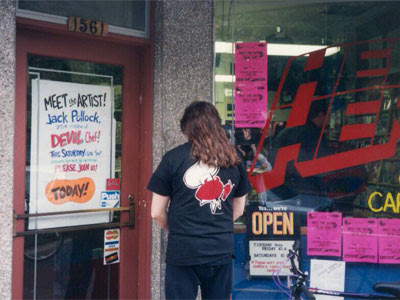 Rob watering the sidewalk on the day of Jack's in-store appearance
Posted by Joe Sherlock at 8:53 PM No comments: Links to this post

As the end of the year races towards me, I'm taking a look at where I am on many of my movie projects...

EVIL RISING - Writer/director John Bowker will be visiting next weekend to upload the final pick-up shots and credit files I have. Which means I need to get 'em done by then!

DEADLY PREMONITONS - Had an incredible screening back in August of a 99% done version. Just a few tweaks left to do.

TWISTED FATES - Have been working a bit on the 'It Haunts' and 'New Neighbor' segments, next up will be music & sound effects for the 'Welcome Sister' segment.

TRULY DREADFUL TALES - The 'Death Nurse' and 'TreeSpirit' segments have been done for a while now, the 'Beetlemaniac' segment has been shot and I am waiting for the footage. The 'Crazed' segment materials are in the hands of the director - hoping they can get something shot by the end of the year. Still haven't made that pool monster outfit, but am leaning back towards rewriting this is a mummy story (which I'd started to do last year).

BLOOD CREEK WOODSMAN - Man oh man this thing turned in to a monster. It's going to be a hell of a flick once it's done. Still have several pick-ups and inserts to take care of as well as a big flashback kill scene. Maybe this month?
Posted by Joe Sherlock at 5:01 PM No comments: Links to this post 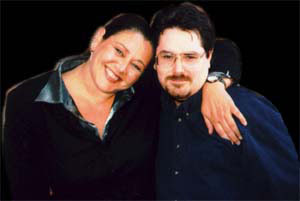 I ran a Camryn Manheim fansite for a few years, starting back at the end of 1997. At the time, there was very little about this actress on the 'net - she hadn't won her Emmy "...for all the fat girls," she hadn't published her "Wake Up I'm Fat" book, etc. I periodically gathered photos and news items and posted them on the site. In late 2002, Camryn opened a new, gigantic official website (http://www.camrynmanheim.com) which pretty much rendered my site obsolete. I chopped mine down to just these few pix and my tale of meeting her. More recently, I've been downsizing my site and decided to move that stuff here.

Meeting Camryn
Coolness of all coolness - I met Camryn Manheim! In person! In the flesh! She was in a nearby town for a book signing and through a variety of circumstances, I was invited to spend some time with her and her brother between dinner and her signing. So, my wife and I got to spend about a half an hour chatting with the Emmy- and Golden Globe-winning actress in a dimly lit lounge in Portland, Oregon. It was surreal! I mean, we had watched her every week as Eleanor Frutt on The Practice and here she was..."real," right across the table. We chatted about my website for her, her brother's website for her, e-mail, movies, the gruelling book tour, etc. It was so cool and she was so nice. We went outside and snapped a bunch of photos before splitting up to go over to the bookstore.

When my wife and I got to the store (after driving around in circles for a while trying to find a good parking place), there was a loooong line and we overhead that this was the "overflow line." That is, the room was already full and they had roped it off. We figured we were screwed and wouldn't be able to hear the reading. Then, through a wonderful set of circumstances, we were waved through the rope and got to spend the entire reading and signing hanging out with Camryn's friends and family behind her table! Like I said, it was surreal.

It was fascinating to stand behind her during the signing and hear all of the things fans said to her. Many brought gifts and letters. Many were moved to tears in telling her how inspirational she was. A long lost high school classmate of Camryn's even showed up! We took some more pictures and then Camryn was off to the airport to catch a red-eye to Atlanta for a signing the next day. She was a very cool, funny and nice woman and quite an inspiration to all! 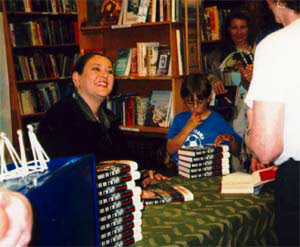 Posted by Joe Sherlock at 2:40 PM No comments: Links to this post