Tom Shaffer will always be my Dr. Mobius

My long-time filmmaking friend Tom Shaffer has passed away.

He was in my movies.

I was in his movies.

I’m very sad we won’t be able to do that anymore. 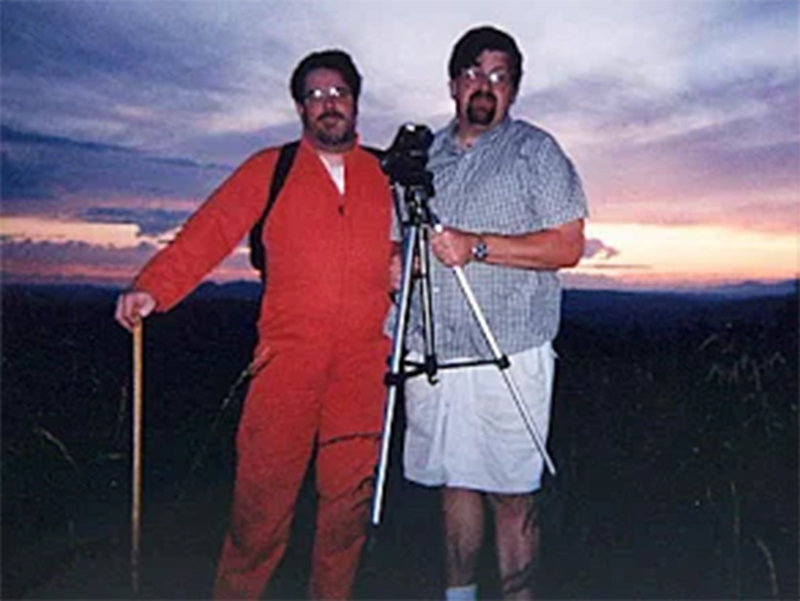 Tom Shaffer will always be my Dr. Mobius.

Way, way back in 1995, Tom starred as Dr. Thomas Mobius in my short feature DIMENSION OF BLOOD. Inspired by the X-Files and my life-long love of horror movies, I embarked on shooting this no-budget epic on my big ol’ VHS camcorder, labeling the raw footage tapes as “Man In Black,” the working title and the mysterious character that I played. There was a lot of collaboration - Tom introduced me to several of his friends and co-workers who were cast, and he provided a lot of locations, and even wrote a few scenes. 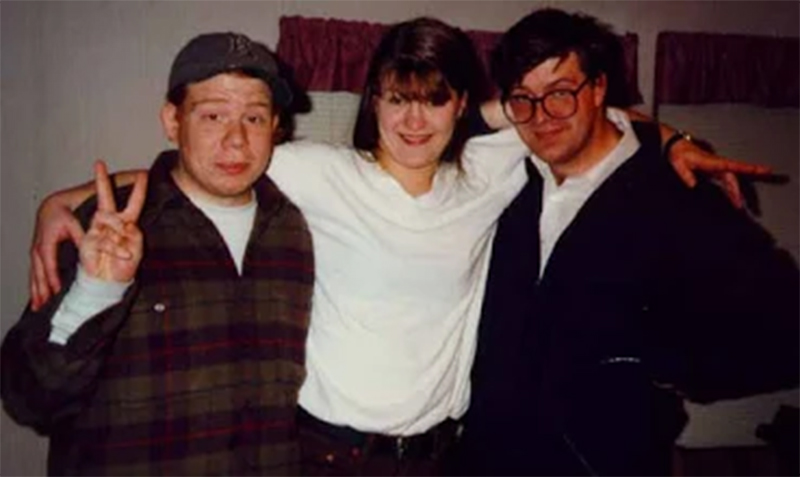 Brian, Brenda and Tom on set from DIMENSION OF BLOOD

I did not realize it until later but Tom’s performance as Dr. Mobius was really just an extension of himself. He was well-read; he had an encyclopedic knowledge of many subjects from history to religion to literature; he had a huge heart and wanted to help people often to his own detriment; he was quirky and had a bit of a stutter; he was a trooper.

We bonded over these do-it-yourself video epics and Tom was quickly making his own movies, which I would help shoot and often act in.

Tom played the title character of my next effort, MONSTER IN THE GARAGE, as well as a hippie party guest and a few aliens. 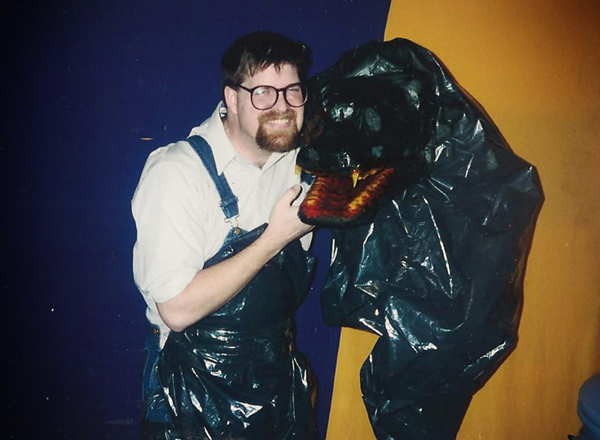 Tom and his monster suit from MONSTER IN THE GARAGE 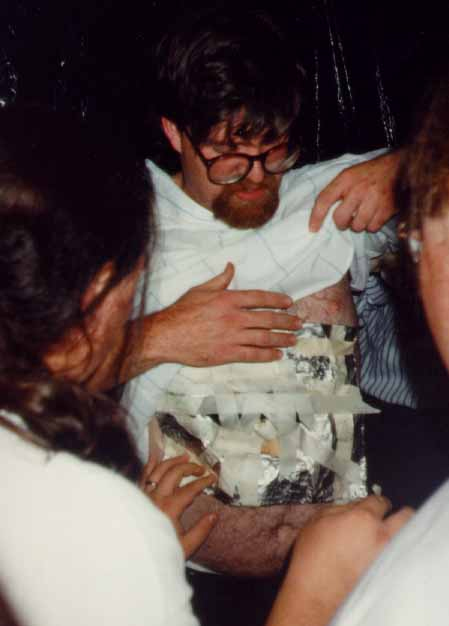 My horror comedy TRAILER PARK DOUBLE WIDE TRILOGY OF TERROR was conceived precisely because Tom lived in a trailer park and loved having stuff shot at his place, so we planned several segments right there.

Tom was in a bunch of my anthologies and features after that.

When I put my thriller UNDERBELLY together, I made Tom the star and I wrote his character to basically be Tom - a nerdy kind of guy who reacts in quirky ways when thrown into a small town world of drug dealers, pimps and ladies of the night. The character uses a walking stick and limps, because in real life Tom’s van had slid off an icy road and he was really using a walking stick and limping. The rusty car that belches blue smoke at the beginning? That was his car, complete with ruffle-edged pillow on the deteriorated car seat.

All the while, Tom was making his own shorts and features, and we often shared a stable of actor friends. The most-told story about one of Tom’s shoots was unfortunately when we were way out in the woods, and it was raining and he had to drive back to town to get a forgotten camera battery while we waited. When he came back, we continued and an actress who I later found out hated tapioca pudding had handfulls of tapioca pudding thrown at her face from off-camera to simulate slime from a monster whose head she was beating in with a branch. She was a trooper. We all were.

Later Tom was bugging me about doing a sequel to DIMENSION OF BLOOD. I had a concept but it was too ambitious for no-to-low-budget and I also had several projects on my plate, so I half-jokingly suggested that HE should make a sequel. And amazingly, he did - in fact he made 3 sequel shorts and then proceeded to make more shorts all about a widened DOB universe he’d created. I was fine with it - the original was still the original - and it was fascinating to see where he took it all. And at the center of it all, there he was: Tom all these years later, once again inhabiting the character of Dr. Mobius. 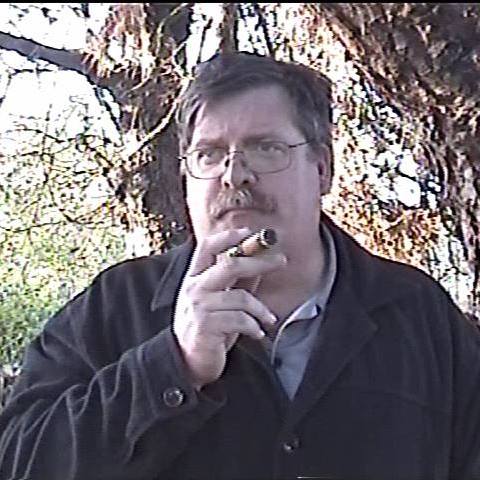 Some of Tom’s videos can be found here - https://www.youtube.com/user/RomneyGack/videos

Thank you, Tom, for making movies with me, and loving your family so very much. 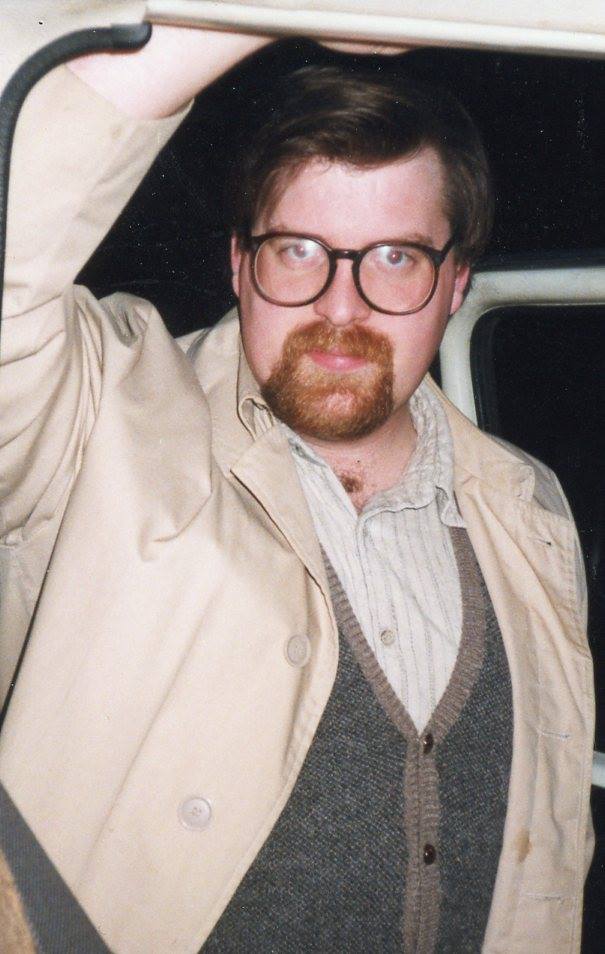 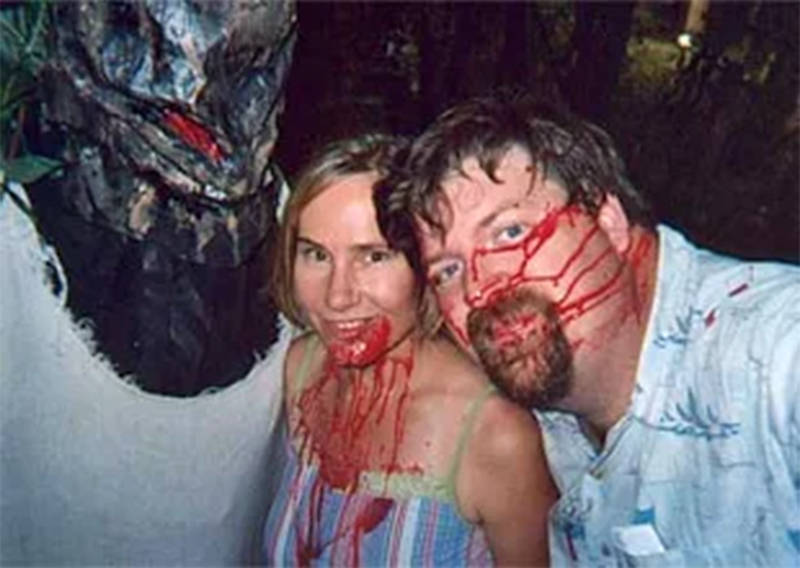 Tom on set of TREESPIRIT, a short I wrote for him to direct and star in for me. 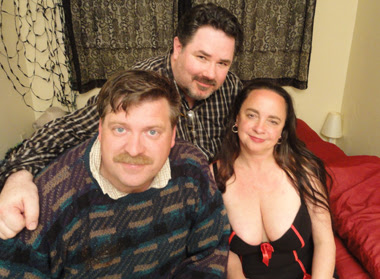 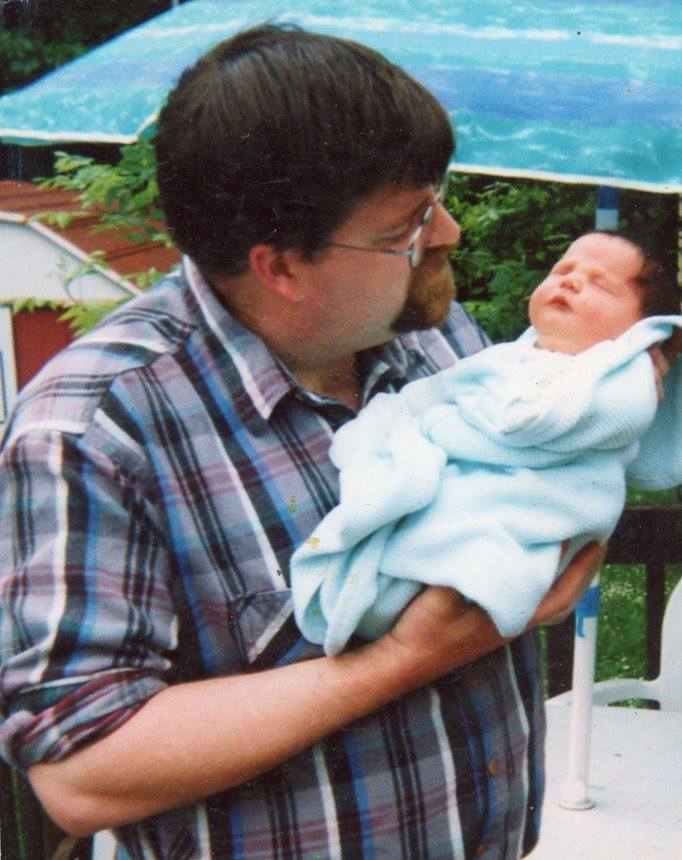 Tom loved his family more than anything in the world.

Posted by Joe Sherlock at 4:36 PM No comments: Links to this post

I put DREAMWALKERS up on my Vimeo channel. This was my buddy John Bowker's first movie, a ambitious sci-fi fantasy, shot on Hi-8 and 8mm video, cut together on 3/4" tape. Seems so primitive now but hey - that's all we had at the time!!

Dreamwalkers from Joe Sherlock on Vimeo.

Everyone has dreams they would like to go back and relive, but Paul actually did something about it. Sometimes, though, a dream can become a nightmare. Travel with Paul as he discovers the truth about the thin line that seperates one from the other.

Paul, our "hero", becomes so obsessed with a recurring dream-woman that he invents a dreams-recorder to cling more tightly to that other world. But something goes wrong...a mishap with the recorder leaves Paul stuck in the dreamworld, only able to leave by fighting his way to an "exit", the path which is controlled by the lord of nightmares.

Writer/director John Bowker’s (Evilmaker/Abomination Evilmaker 2/Platoon of the Dead) very first feature from the way back days of hi-8 video shows his early fascination with dreams, good vs. evil, and getting his friends together to put on a show!

Bloopers included after the end credits!
Posted by Joe Sherlock at 9:15 PM No comments: Links to this post