Shot Link Masters newscaster footage for EVIL RISING up in Washington State, celebrated my son's birthday and had a low-key spring break last week. Got a new desk chair, installed a light fixture, changed some light bulbs, sorted through a bunch of papers and other exciting house stuff. Finished my taxes!

Got the DEADLY PREMONITIONS DVD-r proof from Mike and it looks great! Unfortunately, now he's run into some computer troubles, so waiting to hear how that works out and we'll go from there.

Chipping away at Welcome Sister segment of TWISTED FATES, doing color and sound work. Once it's done, I'll get the NEW NEIGHBOR edit rolling.

Uploaded almost all of the EATER footage and anxious to get working on that.

Gearing up for last weekend of shooting on EVIL RISING this weekend.

Have been working on a series of blog posts for here that I hope to begin putting up in May.

Managed to get a couple of hours of editing in on the Welcome Sister segment of TWISTED FATES. Clocked in at just under 12 minutes. Not bad for a 5-page script! Finished the video edit and am now adjusting colors, fixing sound and working on music.

Friday the 13th came along and my wife got into a car accident and the front of our car is all smashed in. She is OK and our friend who owns a repair shop said it's fixable, so waiting to hear how that goes.

Had a very nice memorial gathering for my father-in-law on Sunday. Lots of old friends and family showed up and it was very nice.

Took care of a bunch of pick-up shots for my friend John for the EVIL RISING project tonight. Shot a bunch of house exteriors and interiors for the opening credits, plus some pick-up shots with Amanda Bounds and a few other odds and ends.

Heard back from Mike Hegg and he said that he's going to get back on finishing up the DEADLY PREMONITIONS dvd tonight. Sweet!

Onward!
Posted by Joe Sherlock at 9:47 PM No comments:

It's only appropriate on this horrific date to post a report on where all of my varied projects are since most of them are horror movies.

PLATOON OF THE DEAD 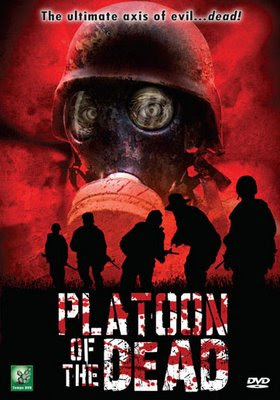 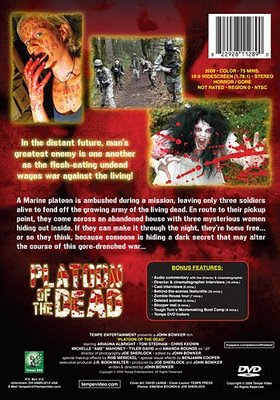 I was the director of photography on this flick written and directed by my buddy John Bowker, as well as doing a whole bunch of other things like locations, props, make-up, asst. directing, craft services, still photos, blah, blah, blah. Everybody did a little bit of everything on this shoot. You can check out a bunch of cool pix at www.drsquid.net/platoonofthedead.html.

Tempe Video is releasing this puppy in June, but you can pre-order it in April - go here for details.

Not only is it a cool flick, but the DVD will come with a whole bunch of extras including cast interviews, a behind the scenes featurette, bloopers and the "zombie house tour," all of which I put together. Sweet.

And here's the trailer!

All of this horror anthology has now been shot. The IT HAUNTS segment is 99.99% done. The WELCOME SISTER segment has only about 30 seconds of footage left to be edited, then it's on to some color correction, sound work and music. The NEW NEIGHBOR segment will be re-edited next (I had it together a few years back but some weird glitch ruined it so I'll be starting over). The narrator/wrap-around is all shot, but will need to be put together as well.

This supernatural/slasher/thriller is all done, but the last bits of DVD authoring work remain. I'm hoping to work with my buddy Mike in the next few weeks to try and get this finished up and get some copies made. 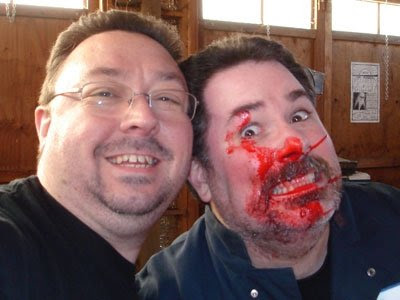 I'm the director of photography and play a small part in this latest horror flick written and directed by John Bowker. We are 2 out of 3 long weekends into shooting this. I'll be shooting some pick-up shots next week and going up to Washginton State to shoot some Link Masters newscaster footage next weekend. We plan to wrap up the project with a long weekend at the beginning of April.

The TREESPIRIT segment is all done, as is the DEATH NURSE segment. I finally sent off the BEETLE MANIAC package to the filmmaker so he can get started on it. Also, once I finish up the POOL MONSTER outfit, my buddy Rob Merickel has agreed to give directing that segment a shot.

I am anxious to work on putting together this sci-fi/horror short feature I made with my son, but right now, all of the above are stacked up in front of it.

I was recently asked to shoot a music video for a friend's band, so that may happen sometime later this spring, if I can carve out the time. 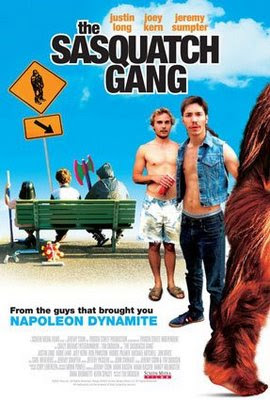 OK, unless you don't have cable, now you can check out the funniest movie I have seen recently without having to rent or buy it.

The Sasquatch Gang is going to play on Comedy Central on Thursday, March 19 at 4 p.m. I don't know what kind of cuts they will make to it for TV, if they cut anything at all as it's all pretty tame as far as that stuff goes.

The Zerk and Shirts characters are so hilarious!!!

The movie was originally shot as The Sasquatch Dumpling Gang, and is known as that all over the world, except for in the US, where the distributor dropped the "dumpling" from the name. Lame. As Zerk would say, "This ain't dang China!"

Here's a video I made with my son and his friends after we were all inspired by watching the movie.

Posted by Joe Sherlock at 5:22 PM No comments:

Scum of the Earth

This pathetic scum should be made to stand outside the exit of a big grocery store, with a table and handmade sign that reads "We stole from the Girl Scouts," and every person exiting the store for the whole weekend would get to punch them in the mouth.
Posted by Joe Sherlock at 5:53 PM 1 comment:

My wife's father died this morning from pancreatic cancer. He was diagnosed just 5 weeks ago. We're his only family caretakers. It was the worst thing I have ever had to go through. Hospice workers are angels on earth. I'll be offline for a while longer. Now that he is at peace, my family can be at peace.
Posted by Joe Sherlock at 9:37 PM 3 comments: