Actress Sonya Davis snapped some swell shots during this weekend's DRIFTER shoot. But we warned, there are serious spoilers here so don't scroll down if you don't want to know too much about the movie. 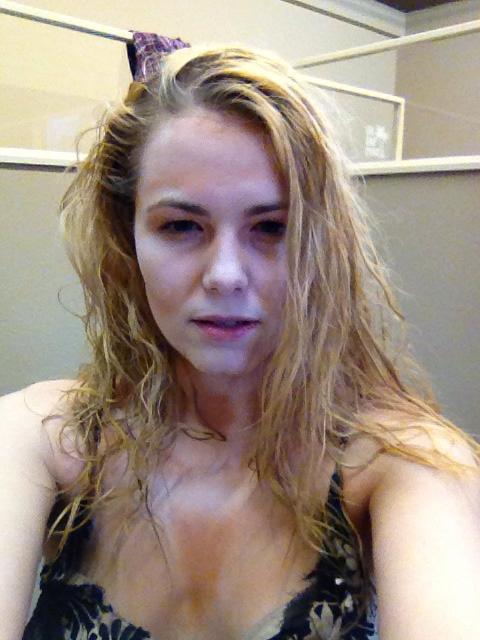 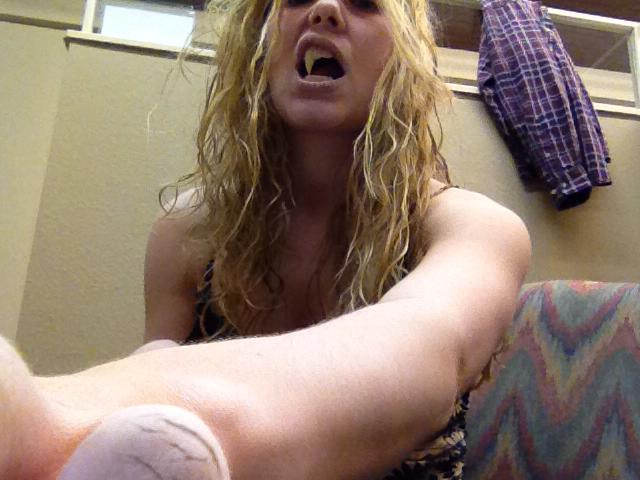 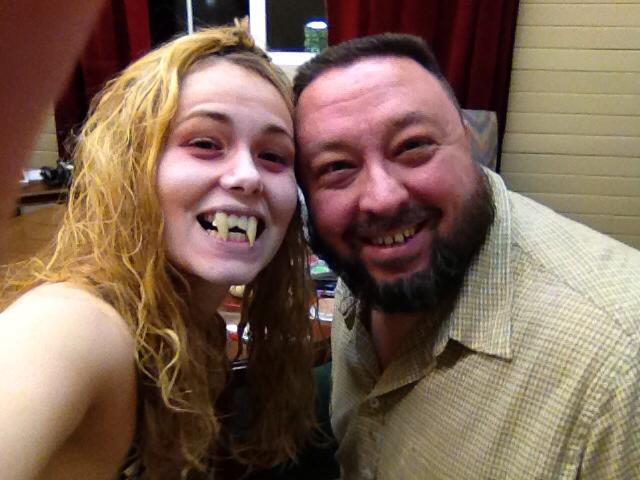 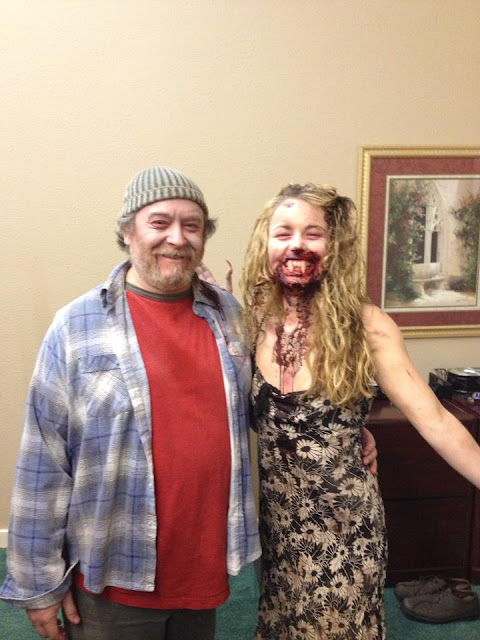 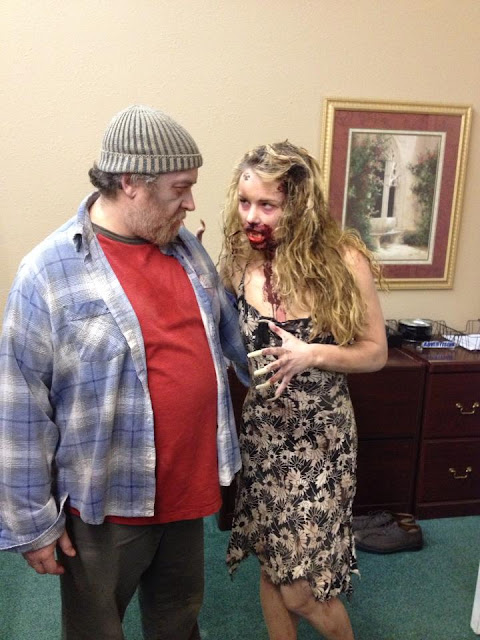 Posted by Joe Sherlock at 11:42 AM No comments: 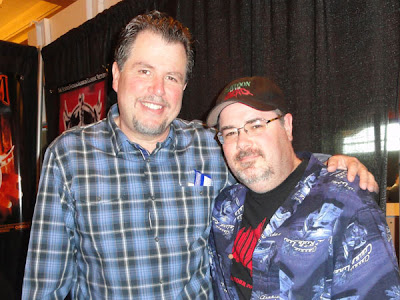 Phantasm is my favorite horror movie.

Creator Don Coscarelli has said in recent interviews that based on the continued interest from Phantasm fans in a Phantasm 5 movie that he would consider it.

He has said everything from, "nothing more than incentive on my part," to "I wouldn't be averse to a fifth film," to "If the stars aligned, I'd think about it," to "We’ve been cooking up a couple ideas, and I like to think that as soon as ['John Dies at the End' is] wrapped up we’ll try to get something going," to "I used to just dismiss the idea of ‘Phantasm 5′, but now I have to take it a little more seriously. There is a rabid fan base that will not be denied! So once I get done with this publicity thing I have to find a way to satisfy that demand!" to "I’m going to seriously consider because if so many people want it how can you say no?"

Don has always stated that the biggest challenge independent film is money.

If I were independently wealthy, I would just contact Don and tell him I wanted to executive produce Phantasm 5 and to get going with it.

But it has me thinking about what it would take. Don seems to be up for it and he has stated over and over again that the original cast members are still all around and up for it. It also sounds like he has at least a few different scripts or at least takes on what Phantasm 5 would be story-wise.

I found these numbers regarding the previous films' budgets.

Now, I know at least one of the Phantasm 5 concepts I read about was pretty post-apocalyptic and a broader scope like that may be a bit more expensive to do than the past movies. On the other hand, with technology today sometimes you can pull things off cheaper than in the past.

Phantasm II, a "studio movie," has an adjusted-with-inflation budget of over $5 million.

Would Phantasm 5 be able to raise $5 million on kickstarter?

It's apples to oranges, but there are similarities. Part of the reason a Veronica Mars movie was even an idea was because of the fan base. There were enough fans who were rabid enough to continue asking for a return of the TV show or a movie that the creator got the blessing of the studio who owned it to try this kickstarter thing out.

Phantasm has a fan base for sure. Are enough of them rabid enough to make this happen? Maybe.

Veronica Mars has Kristen Bell as it's star and she has certainly become what you would call a 'big name' in Hollywood. I think that fact is what really resulted in some of the initial coverage by the mainstream media.

Phantasm doesn't have that advantage of someone involved that the mainstream media would cover in that way. E! Entertainment News, for example.

The other unique thing that got an avalanche of media coverage, which I think got a lot of people contributing who may not have been rabid fans, but were either fans of Kristen Bell or just thought it was cool, was when the kickstarter campaign very quickly zoomed up to $2 million. That was impressive and combined with the novelty of the process and the attachment of a Hollywood star, made it perfect for mentions on all sorts of entertainment and mainstream news outlets.

If Phantasm 5 went onto kickstarter or indiegogo and raised a million dollars in a day, sadly, E! Entertainment News could care less.

So that's the apples to oranges thing about comparing these two properties. 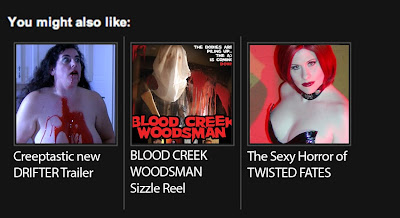 With that all out of the way, how feasible would it be to raise a budget for Phantasm 5 using kickstarter or indiegogo?

Ralph Bakshi, a talented independent creator who has some notoriety from mainstream genre success, recently raised about $174,000 for a new 7-minute or so short that will eventually be part of a larger feature.

A talented independent creator who has some notoriety from mainstream genre success would certainly be a good description of Don Coscarelli.

Paul Giamatti not only acted in John Dies at the End, but he also kicked in some money by being a producer. He said part of the reason he got involved was that he had been a fan of Coscarelli's and of Phantasm for years. Could it be that Paul would once again executive produce with Don for Phantasm 5? Probably. How much? I have no idea? $500,000? Maybe.

There is an accepted process in fund-raising, in particular non-profit stuff where you are appealing to the public for funds, where you try and get several key donations before your "public campaign" begins. That way, to use a United Way reference, your thermometer fills up pretty quickly and that appearance of momentum encourages others to contribute. That, plus it is easier to get people to chip in to reach your goal when you are very close to it (help us close the gap!) rather than when you still have a long way to go.

So one scenario could be that Don works with Paul to raise as much budget commitment as possible before starting the crowd-sourcing campaign. That way they are closer to the goal and the whole "help us reach it" angle might work.

While Veronica Mars got all kinds of mainstream media coverage, it is not horror and the one advantage horror has is a often ravenous fan base and a lot of communication outlets. From blogs to podcasts to news websites, there is a TON of horror stuff out there on the 'net. All of which would be very helpful in a crowd sourcing campaign for Phantasm 5.

Don already attends several horror conventions a year - that is the perfect audience right there. Actors from the Phantasm series also appear at cons and that's just more opportunity to spread the word about a campaign.

You know that once something like this was announced, all the horror news sites would be all over it and news would spread like wildfire through the horror community. Horror bloggers would blog about it and horror podcasters would podcast about it. Additionally multi-genre sites like Aintitcoolnews and Blastr would mention it as well.

But the bottom line is: are the fans who want the fifth movie rabid enough to contribute enough? That's the big question mark. How can the producers hedge their bet?

Phantasm II was just released on Blu-Ray from Scream Factory. I wonder what the sales figures were like for it? That might be a bit telling in terms of the series' popularity, but you would have to take into account that it's not a NEW Phantasm movie.

Assuming that Don and his Silver Sphere Corporation owns the rights to Phantasm, would a company like Magnolia/Magnet (who released John Dies at the End) kick in money to produce a Phantasm 5 if they were guaranteed the distribution rights? Perhaps a few other companies might be interested in pre-buying the foreign and domestic rights, VOD, DVD and otherwise?

Having said all of this - what would be a budget Don would feel he could pull off the movie with? For example, $5 might be an ideal budget, but what if he got $3 million? Is that a deal-breaker? What it was $1 million? Can it be done to the standards he would want? Because he is a nice guy, Don has been able to call in favors from industry friends in FX, music and other areas from his low-budget independent productions. Wouldn't a lot of these friends be up for helping out on the final Phantasm movie?

The downside of all of this: what if a campaign is launched and it raises a bit of money, but not enough? Does that damage the reputation of Don or the series? In some peoples' eyes, yes. Does it make it harder to try again later? Perhaps, especially if it's done in a similar fashion.

What if there are "Hollywood stars" out there, like Paul Giamatti, who are fans of Don and Phantasm, and who would be willing to pony up some funding to get a fifth movie made? How many of those stars would it take to throw together $5 million? I guess it depends on how big they are!

And let's do the old breakdown:

If $5 million is the required budget and $1 million is raised before the campaign begins, the goal is $4 million.

And again, $5 million may be an ideal number - it's possible Don is willing to try and pull it off with less. Maybe much less, based on some of his other budgets.

You never know until you try.

Obviously, all of this is speculation. I don't know Don personally. I am not privy to any information behind the scenes about what it would take to pull this off.

Update: I posted this blog a few days ago and now, I just read a Fangoria interview with Don and he was asked about Phantasm V if he had thought about using something like Kickstarter. Here is what he said, "Yeah, I have. A lot. It seems there might be passion for that kind of thing. When you’ve got something that has a committed fanbase and you can get pretty creative with the perks…for a fifty thousand dollar donation the Tall Man will strangle you on film!"

How Blood Creek Woodsman Happened Because of Crypticon Seattle

In 2009, my buddies and I made the long trip from Oregon's Willamette Valley to Seattle for the 2009 Crypticon Seattle horror convention. We'd been to Fangoria down in Burbank twice, but it was quite a drive so finding a horror con so close we were thrilled. We had a great time and met a bunch of great folks. 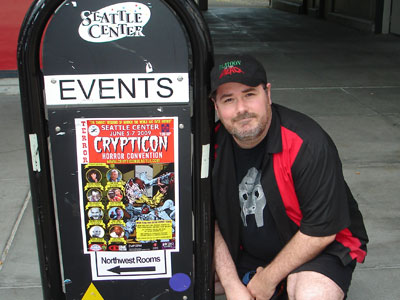 Rob knew Adam Paris from his work in the gaming industry but meeting him in person, John and I knew he was perfect for a huge, hulking killer. 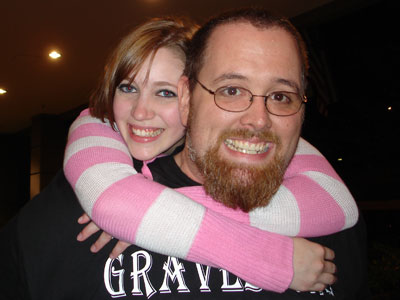 Sculptor William Bivens was a horror fan dying to be in more movies. 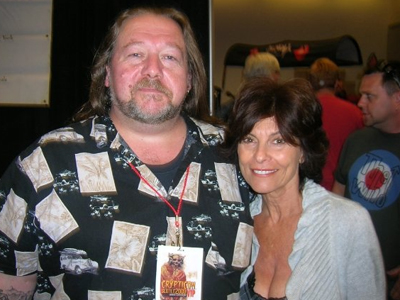 I had worked with Bryn Kristi on a couple of features, but here she was as a part of a spokesmodel group, looking great and always interested in doing more movie work. 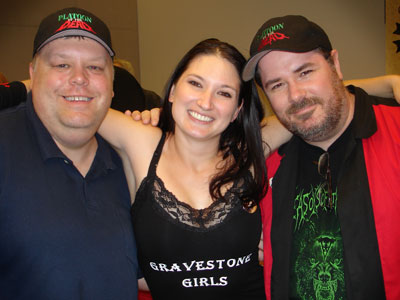 We met more spokesmodels, including Madeline Morgan, Annie Bardonski and Jaime Gurrad, all attractive actresses looking to do more horror! 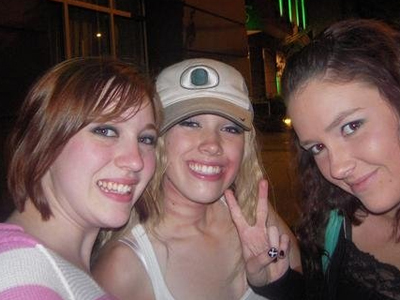 Actor Jake Hueni was there as he was starring in a short feature being screened. 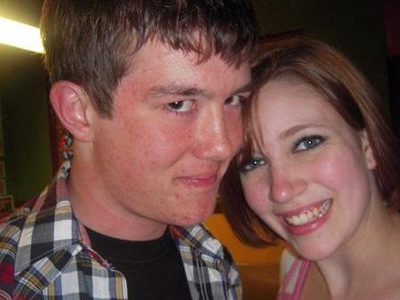 Actor Daren Ackerman was also a panelist for the screening/Q&A for "The Tunnel." 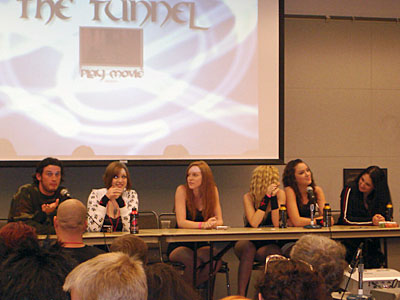 Inspired, John Bowker wrote a body count flick in the spirit of '80s slashers called BLOOD CREEK WOODSMAN. I shot and directed, making sure it was tailor-made for horror fanatics and full of blood, guts and hot chicks. 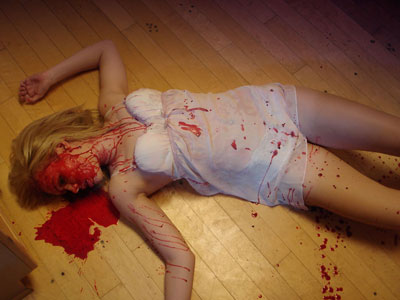 We cast everyone mentioned above, including Adam as the titular hooded killer. 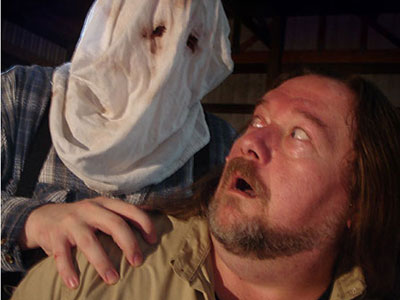 BLOOD CREEK WOODSMAN was shot on HD, in Northwest locations in Oregon and Washington with an all local NW cast (aside from that one guy who came in from Alabama for his part). 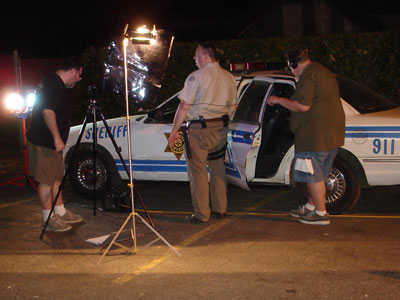 So it is only fitting that BLOOD CREEK WOODSMAN holds it's WORLD PREMIERE at Crypticon Seattle 2013! Join us Saturday night, May 25, 11 p.m. in Emerald Ballroom A, for a rip-roaring good time! 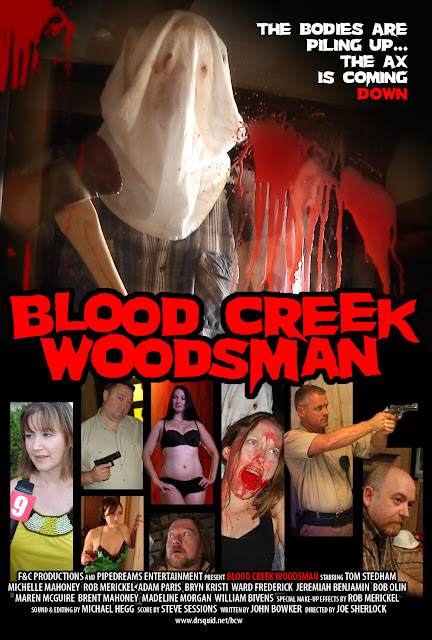