BENEATH A DEAD MOON Pre-Order Packages! 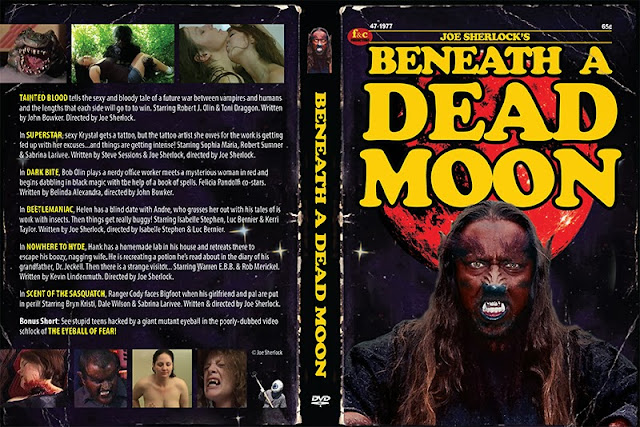 COOL MONSTERS AND HOT CHICKS! I mean, let’s be honest, that sounds like fun, right?

BENEATH A DEAD MOON is a horror anthology chock full of werewolves, psychos, vampires, mutants and even bigfoot, plus lovely ladies and plenty of blood! Six scary shorts plus a little behind-the-scenes & bloopers segment and a Bonus Short: The Eyeball of Fear!!!

From now until October 30, 2013, you can get a pre-order the BENEATH A DEAD MOON dvd in three ways:

1) THE BASIC: nothing fancy, just pre-order the Beneath A Dead Moon DVD for just $12 (shipping in U.S. included)

2) THE BLOODLUST PACKAGE: - Beneath a Dead Moon DVD plus a copy of BLOODLUST 2, the vampire story and art ‘zine that first featured “Tainted Blood” as a short story back in 2000 (NOTE- limited to 6 - only 6 copies of this zine left! Black box on the cover not included - see photo below!) - just $15 (shipping in U.S. included) 3) THE BEETLEMANIAC  PACKAGE - ONLY ONE AVAILABLE! Beneath A Dead Moon DVD plus the actual Beetlemanic monster head mask and hands! This is the one-of-a-kind hand-crafted (and I know ‘cause I made it!) Beetlemaniac monster head worn by actor Luc Bernier in the movie! Plus I’ll throw in a copy of the Bloodlust 2 zine as well. Critical that you email me first to reserve this one-of-a-kind package. $59 (shipping in U.S. included)

Nowhere to Hyde: Hank has a homemade lab in his house and retreats there to escape his boozy, nagging wife. He is recreating a potion he's read about in the diary of his grandfather, Dr. Jeckell. But what he turns into is not at all what he expected. And then there is a strange visitor. Starring Warren E.B.B. and Rob Merickel. Written by Kevin Lindenmuth, directed by Joe Sherlock.

Tainted Blood: This short tells the tale of a future war between vampires and humans and the lengths that each side will go to to win. Sexy and bloody, it stars Robert J. Olin and Toni Draggon, and was written by John Bowker. Directed by Joe Sherlock.

Superstar: Sexy Krystal gets a tattoo, but the tattoo artist she owes for the work is getting fed up with her excuses...and things are getting intense! Starring Sophia Maria and Robert Sumner and Sabrina Larivee. Written by Steve Sessions and Joe Sherlock, directed by Joe Sherlock.

BeetleManiac: Helen has a blind date with Andre, who grosses her out with his tales of is work with insects. Then things get really buggy! This is a reworked edit of the version featured on Truly Dreadful Tales, with new footage. Starring Isabelle Stephen, Luc Bernier and Kerri Taylor. Written by Joe Sherlock, directed by Isabelle Stephen and Luc Bernier.

Scent of the Sasquatch: Ranger Cody faces Bigfoot when his girlfriend and pal are put in peril! Starring Bryn Kristi, Dale Wilson and Sabrina Larivee. Written and directed by Joe Sherlock.

BONUS SHORT: The Eyeball of Fear: See stupid teens hacked up in the woods by a crazy mutant eyeball in this poorly-dubbed (on purpose!) chunk of craziness!

All this plus a behind-the-scenes/bloopers featurette

Posted by Joe Sherlock at 4:25 PM No comments: Links to this post