Kendra, one of the stars of TRULY DREADFUL TALES, got all dressed up and headed to the cemetery to shoot some sexy photos! Take a look! 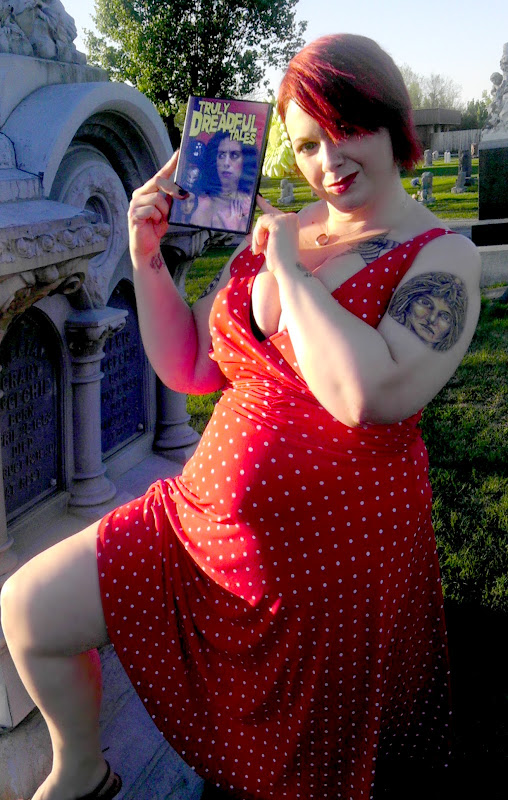 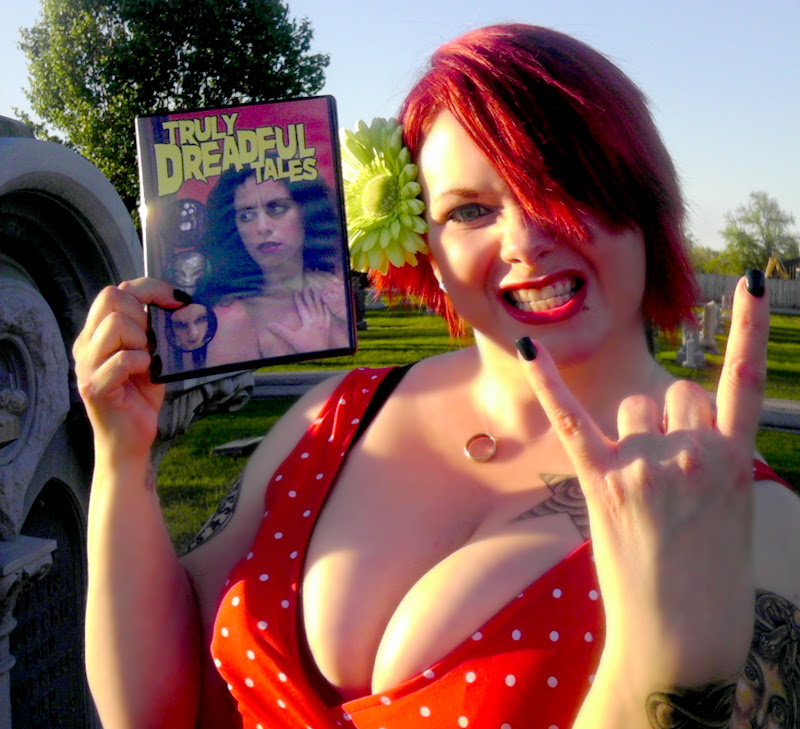 You can get your hot little hands on a copy of TRULY DREADFUL TALES at http://www.wavemovies.com/other_producers/fandc/index.php#dreadful

Speaking of hot, Kendra decided to get one more pic in before the sun set and she couldn't hold the DVD case because her hands were busy...very busy! 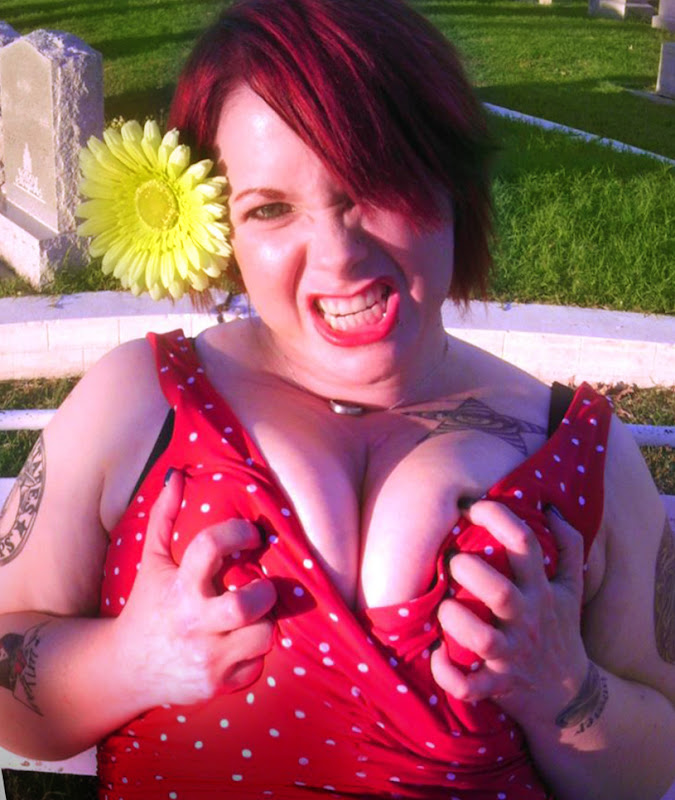 The 2012 Mid-Valley Video Festival in Salem, Oregon hosted the premiere screenings of SCENT OF THE SASQUATCH and TWISTED FATES on February 24, 2012. 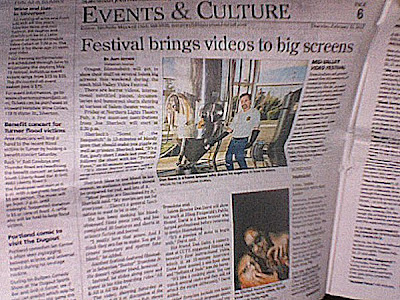 Write-up about the festival in the Salem Satesman-Journal 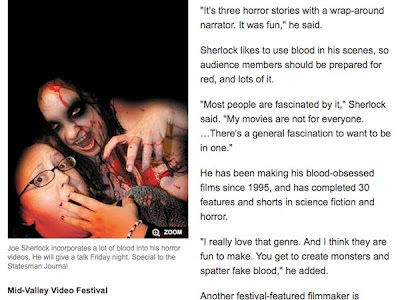 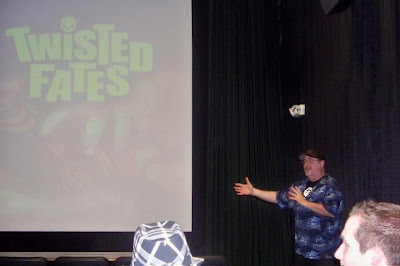 A quick introduction of TWISTED FATES

Q&A after the screening 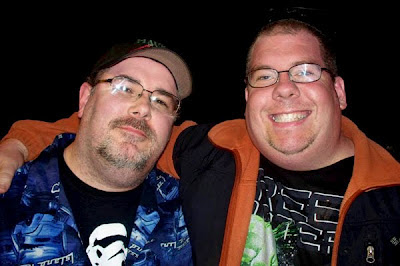 Me and my brother-in-law, Dave 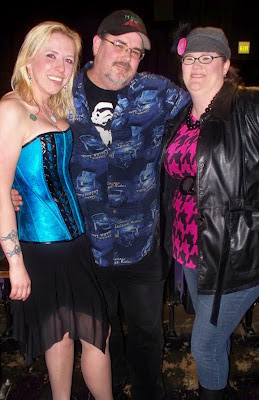 Sabrina Larivee and Dee Alsman (who were both in both movies!) make a Joe sandwich! 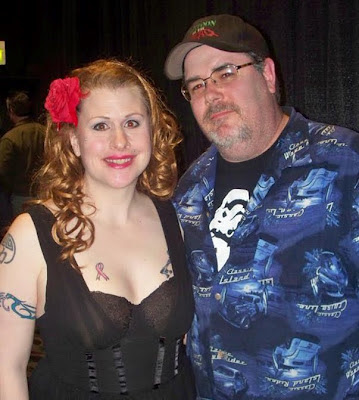 Alexandra Paris made a trip down from Portland for the festival! 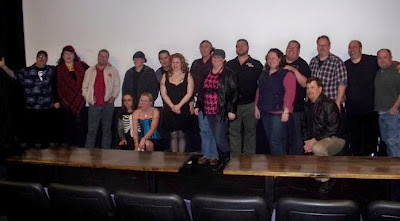 A few friends and fans after the screening

It was really quite a swell time! Thanks to Kirk, Ross and Chuck for putting me in the 'local filmmaker spotlight,' and here's hoping for more fun next year!

Get TWISTED FATES on DVD here!

Posted by Joe Sherlock at 9:37 PM No comments:

A blog that I check out from time to time started putting up "10 years ago" posts every so often. I haven't had my blog for 10 years yet - I started it in late 2004. However, I find looking back at these older posts interesting because the more things change, the more they stay the same.

TRAILER PARK DOUBLE WIDE TRILOGY OF TERROR, which I had finished shooting about 4 years eariler, had been sitting edited, around waiting for final dvd work for 3 years. It would be done and duplicated the following spring.

I also had a short called ZOMBIE LOVE SLAVE that had been put together for a few years, but I was waiting for someone to shoot an opening sequence. That never came to pass, and I had further problems with an actress, so reshot all of her scenes. In the end, this strange 30-minute thing is still unreleased.

I had just had the "Videodrone" segment of TWISTED FATES fall through FOR THE THIRD TIME, and frankly it was exhausting me. I decided to wait until after the holidays to regroup and think about how to try and pull it together for the fourth time. While I did recast and make some plans on shooting it, I ended up shooting IT HAUNTS and decided to just replace the "Videodrone" segment with it to finish up the anthology. I finally finished editing last year and got some dvds duplicated a month or so ago.

I also had the beginnings of what I was calling "MONSTER ANTHOLOGY," with a short with my son and friend John plus a short that W.A.V.E. Video favorite Laura G had shot for me. This morphed into NIGEL CHEESEBALL'S MONSTER FILES and then changed to TRULY DREADFUL TALES, with some segments dropping off and others being added. I finally got the last segment footage at the end of last year and managed to get some dvds duplicated a month or so ago.

It feels good to know that these long-in-production projects are finally wrapping up. I have high hopes for some other years-in-the-making projects to get finished up this year. EVIL RISING which I shot and acted in at the beginning of 2009 is still in post-production with the editor. BLOOD CREEK WOODSMAN, which I shot and directed in August/September/October of 2009 still needs a few insert shots done but editing won't begin until post-production on EVIL RISING is finished. I am 5/6 of the way done with a new collection of old horror shorts I've worked on. Waiting to get raw footage from someone so I can re-edit the last segment.

Hopefully once I clear out this "backlog" of stuff, and I decide what my next project is going to be, I'll try and make sure it doesn't take a decade to get finished!
Posted by Joe Sherlock at 11:04 PM No comments: