A new Producer has come on board TWISTED FATES through the "Producers Package" deal: Tony Masiello of http://www.numbersignproductions.com!

Spent some time the other night fine-tuning a list of scenes to shoot and things to do for moving ahead with DEADLY PREMONITIONS.
Posted by Joe Sherlock at 4:57 PM No comments: Links to this post

Here's some of what this "reviewer" had to say on somethingawful.com. By the way, BLOODSUCKING REDNECK VAMPIRES got quite off easy compared to many other flicks this guy has written about.

That's a really great background to have for writing reviews of horror movies, Andrew.

"BLOODSUCKING REDNECK VAMPIRES" is not the worst horror film I have been forced to watch thus far, but this is about as much of a consolation as being told that my newly contracted thyroid cancer isn't a concern because I'll be dead of ebola within a week.

If we could only be so lucky! Andrew, you tease.

The name "BLOODSUCKING REDNECK VAMPIRES" immediately bodes poorly for the work..."Redneck Vampires" would have sufficed for this movie's title, and even "Bloodsucking Rednecks" could be considered adequately descriptive in a pinch.

The title was given to us by the film's distributor, who hired us to make it.

But by extending the title to "BLOODSUCKING RECNECK VAMPIRES," the film's makers are doing nothing more than prolong my embarrassment when my roommate wanders through the room and asks what the fuck I am watching.

Let me get this straight:

Why exactly do you continue to do this?

The movie opens at some sort of house party where a chubby vampirella sips on a snifter of what I assume to be blood.

Well, it's supposed to be wine, but here is the "chubby" actress you referred to. 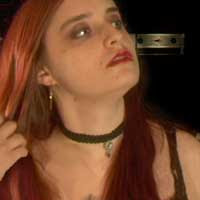 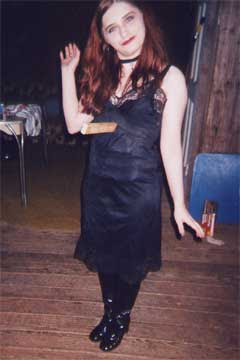 The vampirella rolls her eyes and spits out some hackneyed dialogue...

And good luck with your novel, Andrew.

He eventually gets home and collapses on a couch. I assume it's his home, although one of the many lessons about white trash this movie has taught he is that hicks live in a Shaker-esque communal society where letting yourself into other people's houses and sleeping in their beds is as common an occurrence as, say, sex with siblings.

When in this movie do people let themselves into other people's houses and sleep in their beds? Without permission or knowledge, as you imply, that is - admitedly there is a sleepover scene, but everyone involved knows they're sleeping over.

Get it, because that's all hicks do, is have sex with their brothers and/or sisters! Man, I am on fire today.

Then why haven't you burned to death, yet?! And what about the thyroid cancer and the ebola? You keep threatening to die, but yet you are still here writing reviews!

The movie cuts to another house where a girl who doesn't look a day over fourteen...

Just for the record, she was 16...and she had her Mom's permission to be in the movie.

While the image of a semi-sentient mound of flab sitting on a vampire's horribly crushed skull seared itself into my retinas I was too busy ripping the top off the DVD player and vomiting upon the electronics inside to even consider finishing the rest of the movie.

What? You didn't even finish the movie? Andrew "Linguica" Stine, you are a fucking prick! I'm sure that folks seeking out reviews to help them decide if they want to buy or rent a particular movie really just think to themselves, "You know what would be useful? A review by someone who didn't bother to actually watch the whole movie. Now that would be something I could rely on to make an informed decision. Oh, and it would be even better if he reviewed the genre of movies that he professed to not even like in the first place."

"Reviewing" movies without watching the whole thing is a cop out, you dick.

So this all may seem trivial thus far, the ramblings of some dork who thinks he can be clever and funny by ripping on other folks.

To get a better idea of what an asshole Andrew Stine is consider this: he wrote a "review" of a recent low-budget horror flick, saying, "This is the worst movie I have ever seen," calling it "utterly devoid of merit on any level imaginable," "cinematic bullshit" with a "worthless plot" and "worthless characters." He went on to call the writer/director/actor "hideously ugly," "amazingly unattractive," "an idiot,"and "a disgusting oaf." Andrew even made fun of the production company's name.

Fine. He hated the flick and thinks the guy who made it is unattractive. Everyone has a right to their opinions.

Then Andrew e-mails the writer/director/actor to give him the link to his "review." 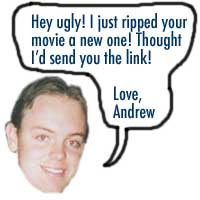 Posted by Joe Sherlock at 3:53 PM 3 comments: Links to this post

I promised a few folks I'd post pictures of a camera prop I made so here it is. I'm having someone shoot some footage for me and it involves a semi-professional photographer character. The person shooting said they didn't have a fancy camera so I figured I'd make a fake one to send them and it would look good enough on video. 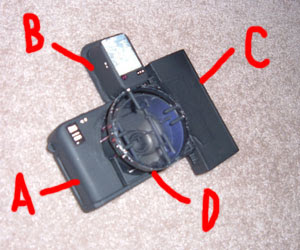 So, I started with a cheapo film camera (A) I got at the Dollar Tree.

In hindsight, I couldn've started with just a rectangular box. I had gone to the store hoping to find a toy camera and was about to give up after not finding one, then saw these real cameras and for some reason figured I'd get it and build on to it.

For the flash, I used a pancake syrup container (B) - in the photo, you are seeing the bottom of it: the peel-off lid was on the backside. It was attached with some strips of duct tape and some model glue.

For kind of a handle/battery pack kind of thingee, I used a small plastic box (C) that used to hold the suntanning goggles that "Tulsa" from BLOODSUCKING REDNECK VAMPIRES wore. This was just attached with duct tape.

The lens was built up with some circular plastic rings leftover from some of my son's toys (D). Not sure what exact toys they are from, but you know when you get plastic models and the small parts come on a kind of plastic grid and you wiggle and snap off the small parts? Well these rings had small parts on them and they'd been wiggled and snapped off. Anyhow, I put three of them together with duct tape, then taped the whole thing onto the front of the camera.

I'd taped off a rectangle for the "flashbulb" but when I peeled the gaffer's tape I'd used of, it left a bunch of glue behind. Not much I could do about it, so I just left it.

The final touches were using a liquid paper pen, black marker and red marker to make some little dots, squares and such on the camera. I'm hoping that the lines and stuff on the lens look like all those focus marks on a real camera. You can see the lines better in the photo below, but when I took this photo, the flash really shows the fakeness of this thing. Again, on video, while being held by someone, with lights reflecting off of it, it should fool the audience. 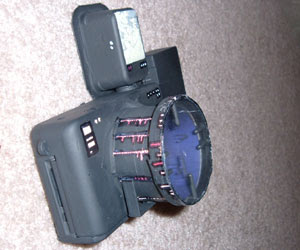 Posted by Joe Sherlock at 10:44 PM 2 comments: Links to this post

It's been a little over a week since I got a phone call from my mom telling me that my dad had a heart attack. He went to the hospital, had several hours of surgery and is thankfully home recovering. I was sick all last week with some sort of cold/flu/cough thing. My grandmother's funeral was about a month ago. I've been wrestling with computer problems for what seems like 2 weeks now. I'm trying to lose weight so not enjoying food as much as I did last year. Haven't slept well in a while.

Tell your loved ones you love them.
Posted by Joe Sherlock at 4:47 PM 6 comments: Links to this post

2) Publish an issue of Dr. Squid

3) Go to the June Fango Con in Burbank

I've got other hopes for the year, including losing 50 pounds, paying off my credit cards, and other stuff, but if I can manage the above 4, my movie-making side will feel pretty good.

- Joe
Posted by Joe Sherlock at 1:59 PM 4 comments: Links to this post