When I was in high school and college I loved Bob's Burgers. They were cheap and had awesome sauce! Sadly, all the Bob's locations have been closed for a long time now, BUT the family still makes the sauce and sells it in a few places in Eugene. My buddy Dale picked up a couple of bottles for me recently and we planned to recreate the good ol' Bob's cheeseburger. 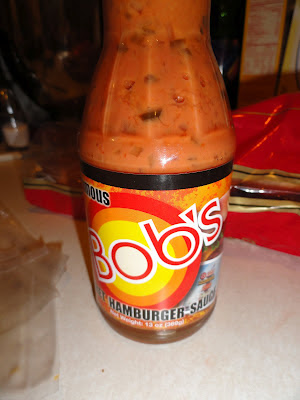 I had done this last summer, but made the burgers way too thick and used real cheese. They were good, but not like those good ol' cheap fast food Bob's cheeseburgers.

This time, I had an inside track, though. Lisa, a girl that I went out with in high school, had worked at Bob's when I was in college and she had recently friended me on Facebook. I knew I had to make the burgers thinner and planned to cook them on a big griddle to get close to that fast food grilltop method. I asked her what else I should do. She told me to not only make really thin patties, but to freeze them! Of course! Then, cook them and flip only once, salting after the flip.

I needed to use that plastic-y cheese like Kraft Singles, which I had planned on. She also said to butter the buns and toast them on the cooktop. Slather the bottom bun with sauce, stack the burger with melted cheese on top, then the top bun and I'd be done! 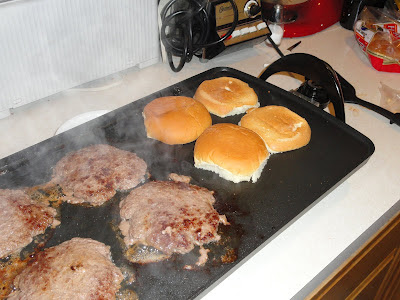 It was amazing how much my kitchen smelled like a fast food place once I slapped those frozen patties onto the griddle!

One interesting tidbit - Lisa said that they used to put the sauce on with a flattened out spoon, but that they had to replace it every once in a while as the sauce would eventually start to eat away at the spoon! Yikes! Well, the first ingredient is vinegar after all. 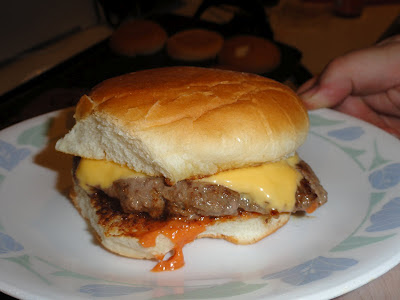 They were nearly perfect! Even though I tried, the patties were still a little too thick, so the meat to sauce to cheese ratio was off. But they were still DELICIOUS!!!

My next plan is to just go buy some McDonald's cheeseburgers, PLAIN, and then add the Bob's sauce.

I'll let ya know how that goes...
Posted by Joe Sherlock at 1:13 AM 1 comment: Links to this post

Happy Birthday To Me! 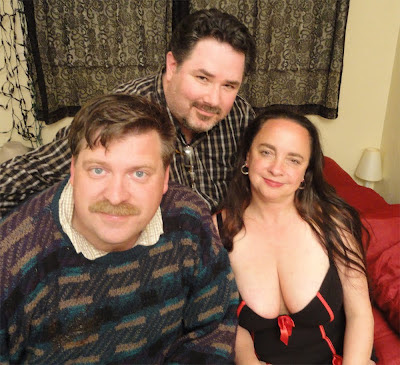 I celebrated by birthday the other night doing what I love to do - shooting scenes for a cheeseball horror movie! 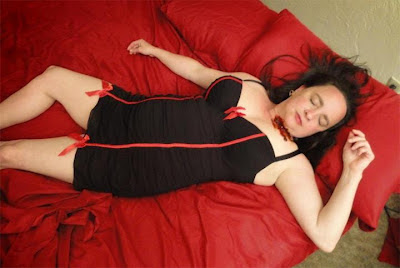 More info and pics as this project wraps up.

Meanwhile, I finally had a chance to look at the tapes that were thought to contain the werewolf short footage. And guess what? THEY DID! One tape was damaged to an extent that I can't use the footage (the tapes were in an attic in an area of the state where it is desert-hot in the summer and lots-of-snow cold in the winter, so that may have had something to do with it, who knows?) and one tape turned out to be the director's vacation footage, but one tape had werewolf footage on it.

I dubbed it from Hi8 to miniDV and the next step will be to import it into my mac and see how much I want to re-edit - perhaps a few scenes, perhaps the whole thing. We'll see. Step by step...
Posted by Joe Sherlock at 6:00 PM No comments: Links to this post 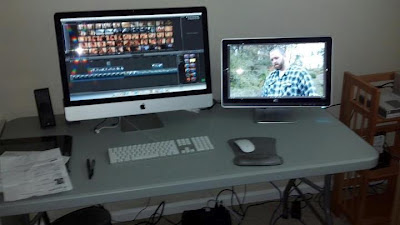 So excited that the editing on BLOOD CREEK WOODSMAN has begun. I spent last weekend sitting next to Mike Hegg as we slogged through take after take, angle after angle and managed to get the first 6 or so minutes together.

Even in that short bit, there is amazing stuff. And Mike and I do seem to be of one mind with a lot of this stuff, so that's even better. Many more trips up to his place in my near future but I am so psyched about this phase beginning!

Meanwhile, I have a shoot tomorrow night for the vampire chicks project I've been working on, and just lined up someone yesterday to shoot a small part for the project as well. Details later...

Worked on a script for a new short.

Many irons in the fire...as usual...
Posted by Joe Sherlock at 6:00 PM No comments: Links to this post

And The Lycanthrope Turns... 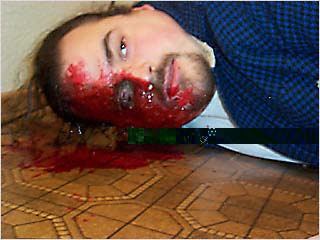 So a few months back I posted about the long and winding road that a certain werewolf short had taken to get done. After all of that, I just found out that the original footage tapes may have been found after all...in an attic of all places. Since the owner's camera is broken and the tapes unlabeled, he can't tell me if they are indeed the tapes. I've asked him to mail them to me so I can check them out.

If they turn out to be the tapes of raw footage for this short, I plan to go in and re-edit a few sections, which will mean I'll need to rework some of the sound effects and soundtrack as well. With my summer calendar getting jam-packed already, I am not sure how much delay this puts on BENEATH A DEAD MOON, but I'd gladly take the time to make these improvements if the tapes turn out to be what he thinks they are. Of course, if they turn out to be more vacation videos, then I am right back where I am right now: almost done!

Meanwhile, I am excited as all get out because editing on BLOOD CREEK WOODSMAN has begun! This thing is jam-packed with b-movie horror goodies and I can't wait to see it come together!

Meanwhile, I've been trying for the last three weeks to schedule the last bits of a campy vampire feature I've been working on with Tom Shaffer, but everyone's schedules have yet to align. Maybe this week? And so it goes...
Posted by Joe Sherlock at 5:30 PM No comments: Links to this post

Had such a great time this year! Check out the photo-filled trip diary here: http://skullfaceastronaut.com/drsquid/crypticon2012/ 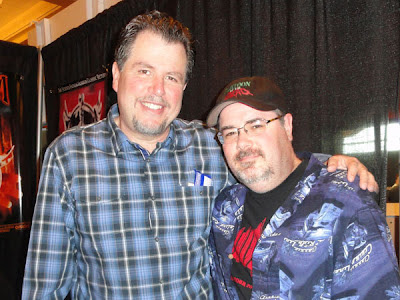 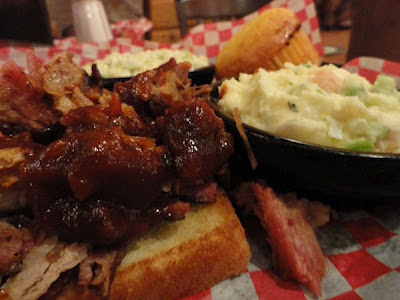 Posted by Joe Sherlock at 10:20 PM No comments: Links to this post