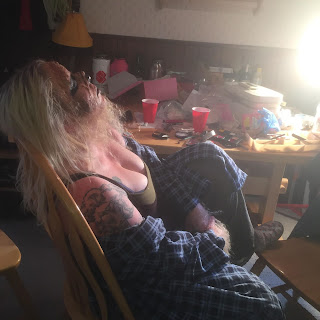 Hey there everyone, Well, with events being cancelled left and right, I'm still here plugging away trying to get stuff done.

3 weeks ago was the first time, actually, that a shoot had to be postponed due to someone's fears about COVID-19. Wow. Travel plans for someone involved in a top-secret feature project (that came together so quickly I had not even mentioned it here yet) changed, then 2 people dropped out. I could tell that more would likely drop out as well, so I called the feature off for now. That weekend, the governor declared gatherings I would have done to film thing thing illegal, so I guess just as well. Hopefully it is something I can do later in the year.

So what's been going on?

THINGS 6 - So close! I shot some good stuff with director/actress Tonjia Atomic a couple of weeks back, as well as the main part of the wrap-around. Got the opening sequence finished and also a cool initial sequence that I think people will get a kick out of. I had shot it few weeks back but had skipped one shot, figuring I could pick it up later. Well, then all the new rules started up - so, a few days later, I tromped way into the woods by myself, set up the camera, put on the costume and got the one shot I needed. That allowed me to finish editing the sequence in addition to locking in the music and doing some special effects. Have done a lot of sound effects and color work. Pretty much everything I can do until I can get together with a few actors to do a day or day and a half of shooting to wrap it up.

My band ZIPSQUID (http://www.joesherlockart.com/zipsquid) had recorded 11 songs and bits of music for THINGS 6, and I'm also working in a few of our previously recorded songs. It's working out really well. Here is a short song (it was actually a recording we did as a sound check, which is why it was just part of the song) that I sweetened up and is used in the movie: https://soundcloud.com/user-762948902/calling-for-you-1

THINGS 7 - I shot part of this back in November of last year just because a few people's schedules aligned. I'll kick this into high gear once THINGS 6 is completed, and I can get together with people again.

CHANNEL 99 - Just a couple of months ago, I got the idea to gather together some of the shorts I have done in recent years into a new collection. Initially I thought of some old VHS tapes being the framing device. But then I was talking to a few actresses about their availability for some other stuff and realized I could shoot a short we'd been all set to make 2 years ago and due to last-minute scheduling conflicts had to be cancelled. So we managed to get that segment shot in one long day, and it turned out so well, I decided to add it to this collection of recent shorts.

Well, then the vibe sort of changed and I got the idea to use a fake pay-cable channel as the framing device and CHANNEL 99 was born! Having Showtime when I was in middle and high school exposed me to all sort of flicks and it's been fun to create some similar bumpers and fake commercials for Channel 99, inspired by the late-80s ones on Showtime.

Things sort of continued to morph and I've ended up shooting two more new segments to go into the movie! I'm just editing along on this while stuck at home and it's nearly done. However, there are a couple of critical scenes I need to get with an actress in Portland and she's staying at home for the time being so, I'm just kind of stuck getting the last bits I need for it. As soon as I can get it wrapped up, I'll be sure to let y'all know!!

Had fun helping my friend Floydman Sumner put together a commercial for his new self-published trading cards THE ROCKING DEAD! Check it out here: http://www.therockingdead.com/index.html

I posted about actress/director/dancer/artist Amira Lyn the other day on Facebook, and that she had been working on a film from a screenplay I wrote called BAD ILLUSIONS, based on a story by Luc Bernier. Amira gave me an update: "Still have 2 small scenes to film and once this virus goes away I can finally get it done and edited." Excellent!

Did you read this far? Well here is a SNEAK PEEK at both THINGS 6 and CHANNEL 99 that I threw together: http://skullfaceastronaut.com/sneak/

TUMBLR: http://skullfaceastronaut.tumblr.com
Posted by Joe Sherlock at 11:19 PM No comments: Links to this post