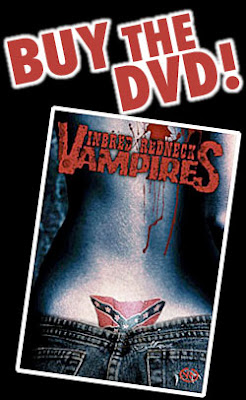 Bloodsucking Redneck Vampires has been sold out from the distributor for a few years now, but they are rereleasing it in June with a new title and artwork. Same movie and extras as the original release. You can preorder it now at http://www.seeofsound.com/p.php?s=MVD5000D

Thinking about planning a few screenings this summer since it will be available again...
Posted by Joe Sherlock at 12:43 PM 1 comment:

A new cooking show is coming about a catering and event company who is hired by a demanding client to produce an extraordinary celebration or event. The owner and his team of party planners and chefs must dream up a theme and cuisine and tap the depths of their imagination and culinary talents! New show on Bravo!? Food Network? Travel Channel? Of course, not, silly goose! It's a new show from SyFy Channel!

How about a show about a magician who teams with thinkers and illusioneers, starts with doodles in a notebook, and creates breathtaking, mind-bending events for his clients. Disney Channel? Another new not-a-cartoon for Cartoon Network? Oh why bother, you already know it's a new show on SyFy Channel.

Since SyFy describes it's next new show as a "docusoap," I'm not even going to bother with it. Docusoap? Really? It is about a inventor and scientist, so I guess that might actually be relevant to the "science" part of "sci-fi." OH WAIT! Sci-Fi changed their name to SyFy, so that doesn't even work now!!!!

A game show about special-effects make-up artists might be cool and I guess might connect to science-fiction films at least, depending on what types of effects they are doing. Another 'Paranormal' show, a Big Brother type of show with folks in a biodome and an 'Untitled Artifact Search Series' round out the list of new shows.

And don't forget, SyFy is your home for.....wrestling.

Footnote: Yes, I know Sci-Fi changed to SyFy last year and declared their new genre as anything that was "imagination-based entertainment" not "science fiction," so it admittedly no longer requires any of it's programming to necessarily be science-fiction, which makes this rant pretty much null and void as far as the SyFy folks would be concerned. But I don't care. I still think it sucks that I watch way more science fiction on THISTV, AMC and even FX and SPIKE for Christ's sake than on SyFy.
Posted by Joe Sherlock at 4:50 PM No comments: