I'm putting some original artwork up for sale. These are charcoal and/or pencil renderings. 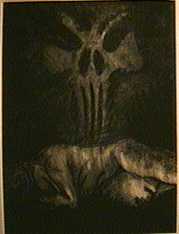 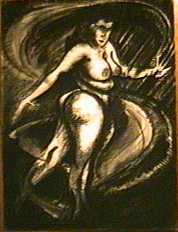 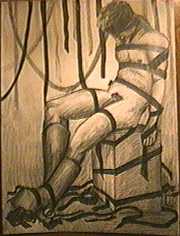 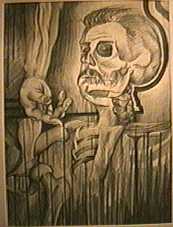 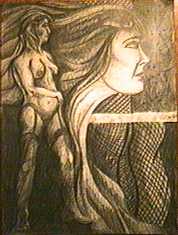 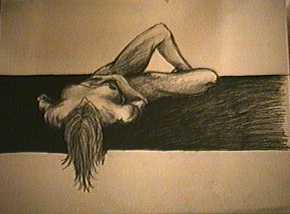 Reclining on a Line 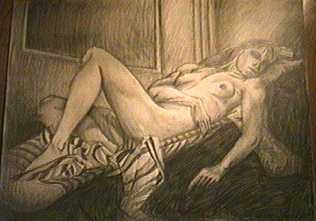 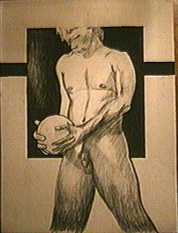 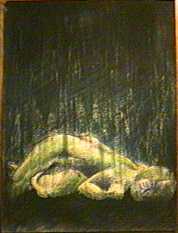 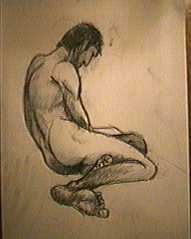 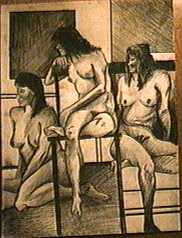 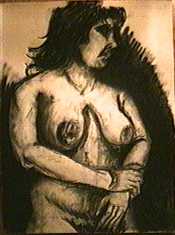 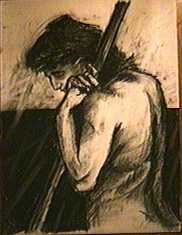 
Posted by Joe Sherlock at 5:30 PM No comments:

Last year, I was talking to Tom Shaffer, who played Dr. Mobius in my half-hour sci-fi horror movie DIMENSION OF BLOOD back in 1995.

He had delivered a pizza to a woman who bore a striking resemblance to the character of Leroy the janitor in DOB, and Tom suggested that I make a sequel featuring this woman as Leroy's long lost sister or something. 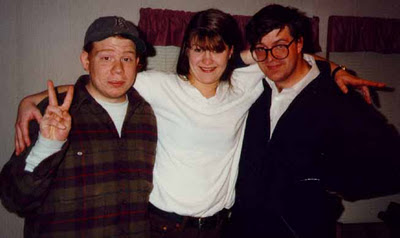 (Brian, who played Leroy, along with Brenda and Tom behind the scenes of Dimension of Blood)

At the time I was neck-deep in projects and said that I just didn't have the time.

He replied, "Well, you should let ME make it."

I thought about it for a moment. I have long had an idea for a sequel or more accurately, an idea for a remake of the first one with a second and third act added. But I hadn't really made any moves towards making that and wasn't sure I ever would. Considering that it would be 'interesting" to see how he would interpret the world and mythos I had created year ago, I said, "Why not?"

Tom worked on writing, casting, directing and editing his 40-minute sequel to DOB over many months and we finally had a little premiere party for it at his house late last year.

Since then, Tom has continued to write some spin-off shorts that are set in this DOB2 world that he's created. That's kind of far out!

Here are a few screen caps from DOB 2: 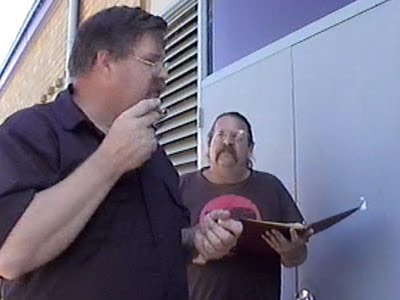 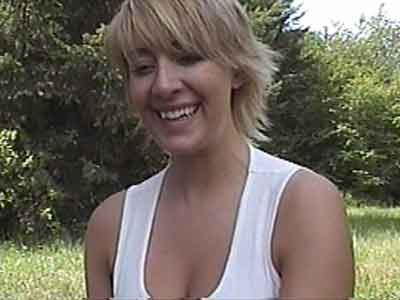 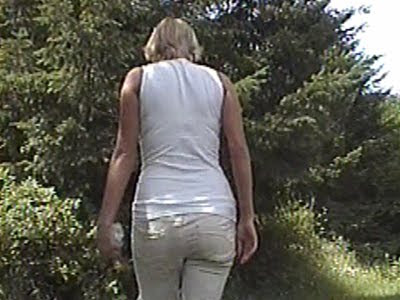 Meanwhile, I spent some time last year remastering three of my early flicks, including Dimension of Blood, with the intention of putting them out on a DVD together. It's a bit of a back burner project right now, but I hope to get it done sometime in the first half of this year.

Posted by Joe Sherlock at 6:50 PM No comments:

Very busy in the non-movie parts of my life, but making progress here and there. Last night I took care of some more Blood Creek Woodsman pick-up shots as well as inserts for a horror short I am remastering. Spitting blood onto a tree, my driveway and a piece of plastic - good times!!! Also gave the burned body prop a first coat of paint.

Another year has flown by. I was able to make some progress on a number of movie projects and am feeling pretty good about getting more projects wrapped up in 2012.

Twisted Fates - Mid-Valley Video Festival in Salem, Oregon screened the "Welcome Sister" segment earlier this year. Screened the trailer at the Underbelly premiere in December. Designed the DVD sleeve and imprint. Final post-production is done! Will be released on DVD in early 2012!

Truly Dreadful Tales - After I finally found out after several months that the original person hadn't shot a dang thing for the "Crazed" segment, I told them to just forget it. I set Tim Shrum (of http://kidschlocko.blogspot.com) up to shoot it. He made some cool props and shot some nifty catfighting! I spent the end of the year getting that segment edited and scored. I also did the music and sound effects for the "BeetleManiac" segment. Designed the DVD sleeve and imprint as well. Checking the final DVD master and plan to have it available in early 2012!

Underbelly - After being out of stock for years, I re-released this at the end of the year with a snazzy new cover and put together a trailer for it. Available in the store. Held a successful premiere screening/dvd release at Northern Lights Theater Pub in Salem, Oregon in December.

Blood Creek Woodsman - Shot some pick-up shots and worked on a snazzy paper mache burned up body prop. Still a few more pick-up shots left to get and then it's off to the editor!

Bloodsucking Redneck Vampires - Held a screening in February at The Club, a bar we shot parts of the movie at in Winlock, Washington. The next night, Two-Minute Miracle, who performed the title theme for the movie, played at the same bar. Good times! Copies available in the store (under distributor's new title Inbred Redneck Vampires).

Deadly Premonitions - Finally released at the beginning of this year. Cut a new trailer for it. Held a screening at Northern Lights Theater Pub in Salem, Oregon in March. Copies available in the store.

Dimension of Blood, Monster in the Garage and Crimson Heather - Planning a DVD-r triple-feature release of these older projects from 1995-98 or so. Remastering as best I can from 3/4" videotape originals and have spent a LOT of time fixing a lot of sound issues. Designed sleeve and dvd imprint, created photo gallery and edited DOB behind-the-scenes featurette. To be released in early 2012.

Beneath a Dead Moon - Started work on this anthology of some of my horror shorts. A few recent ones, a few from years ago. Have been importing old footage, tweaking sound issues, re-scoring, etc. Will be nice to get these out on DVD for folks to see! I wrote/shot/edited/scored a bigfoot short, "Shriek of the Sasquatch" this summer. Decided to go ahead and post this one online to share, but it will be part of this anthology as well.

In other people's movies news, I shot a sequence for a new monster movie from WAVE Video. I got to be a tiny part of Luc Bernier's horror anthology HATE by playing Fred, a voice heard on a phone. It was cool because I recorded myself reading the lines in my kid's bedroom, imported the footage into my computer, made a quicktime file, e-mailed it off to the editor and about 20 minutes later, I was in the movie! I'm also acting as a producer on an upcoming horror anthology (working title Abberations).

Wrote a fun horror short and finished outlining a horror comedy script I've been working on.

Did some cartoon illustration this year: a couple of t-shirt designs as well as some possible art for a horror RPG. Also did some logo design.

Spent Spring Break in San Diego visiting friends and got to check out Legoland, the zoo and SeaWorld. My sister got married this summer and I was in the wedding plus helped with a bunch of stuff and made a nice photo gallery dvd that we played at the reception. Even sold a few movie posters! http://skullfaceastronaut.com/drsquid/postersforsale.html

Went to Crypticon Seattle in May with my buddies and had an awesome time! My photo-filled trip diary is here! 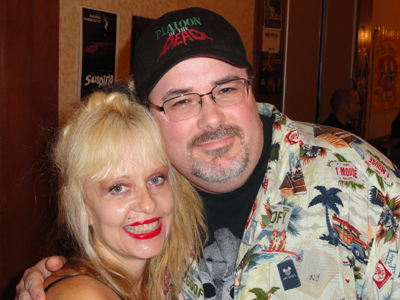 Saw Loudness in Portland, Oregon in May and Judas Priest in Seattle in October! RAAAAWK!!!!! 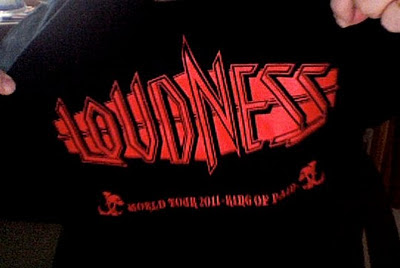 Another busy year full of stressful times and fun times. As usual.