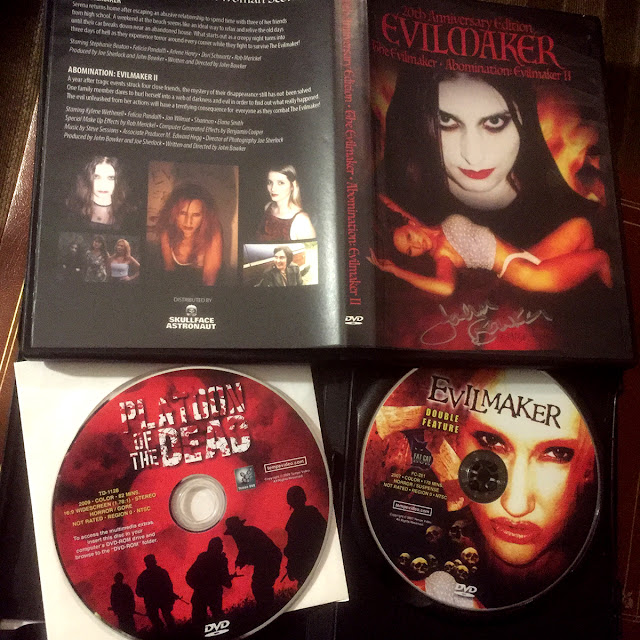 Details at http://skullfaceastronaut.com/evilmaker20th/
It's hard to believe that 2 decades have gone by since the release of the indie horror cult hit THE EVILMAKER. Starring the voluptuous scream queen Stephanie Beaton and indie girl Felicia Pandolfi, writer/director John Bowker's horror opus garnered coverage from Draculina magazine to B-Independent and countless other websites. Arrow In The Head raved, "Ambitious effort strikes chords most small budget offerings don’t try to hit...Stephanie Beaton’s best performance ever!"
This special release is the excellent double feature disc put out by Tempe Video, including THE EVILMAKER and ABOMINATION: EVILMAKER II features, plus great extras including the fantastic 44-minute documentary on the making of ABOMINATION. A new dvd sleeve, marking the 20th anniversary of the original's release, is signed by writer/director John Bowker and LIMITED TO JUST 30 COPIES and over half are already gone! As a special bonus for this limited edition, a dvd of John's other Tempe Video release, PLATOON OF THE DEAD will also be included.
Posted by Joe Sherlock at 9:51 PM