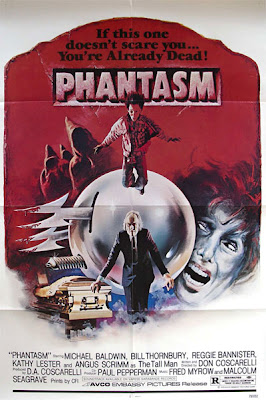 For a good five years now, I've had a tradition of watching my favorite horror movie, PHANTASM, on Halloween night.

I first saw PHANTASM on the CBS Late Movie in 1981. There I was, sitting alone in the dark in the dead of night (dead of night for a middle school kid), my family asleep at the other end of the house.

The creepy psychic lady. That box he had to put his hand in. The Tall Man. The spheres. The bug thing. The yellow goo. The volkswagon on it's side. The sound in that room with the bars.

Edited as it certainly was for TV, it still scared the crap out of me.

Nowadays as my kid gets older and stays up later after trick or treating, I have to start watching it later and later. Which is fine - I think it's better to watch it in the wee hours of the morning - when it's quiet and still outside and pitch black. When the rest of the family is asleep at the other end of the house.

In a few years, I'll be able to watch it with my kid. It won't be the same as when I discovered it by accident all alone in the dark. But I think he'll dig it just the same.

I've had a lot of fun poking around in here.

Phantasm is a great choice for Halloween viewing. Enjoy!

Thanks for all the enjoyable Halloween posts!

Great work on the countdown!